Thanks to the emergence of a two-day news in general is that Apple appears on the official website recommends using antivirus software, coupled with previous PC VS Mac ad mocking them several times to secure the above-related issues, so this news came to light several previously recommended the the use of Mac's friends came to ask if the installed anti-virus software should not, in fact, Mac, is now probably more likely to access the Trojans, but the number with the PC is also much less than that, we must face is not easy, but for the general user In fact, whether Trojan horses or viruses, as long as the computer will affect the performance or use of the situation, most of them have intuitively will only say that poisoning, probably would go out less, or want to understand the distinction that in the end is the Trojan horse, or true middle of the destructive power of infectious virus, if there are serious differences between the two want to know please point it.

With OS X, UNIX features, as the powers under control, there must be really have not obtained the permission of the circumstances, will be able to damage the core of the virus into the system, it should have is a very serious situation, but in fact this probability is still very low, if still very worried about a friend, you can use ClamXav, and introduced prior to theiAntiVirus, but before the ClamXav does not have an immediate anti-virus functions, but in Sourcefire acquired ClamAV, after being functions have increased, while the Mac, ClamXav is also used after version 1.1 (released last year, around June), through which open the Preferences ClamXav Sentryfeature, you can have real-time protection features.

However, from my own experience, use, and put on the number of real-time protection software systems will have the feeling of slow, but perhaps accompanied by some uncertainty, so in fact often felt that, in the above may be poisoning OSX, prior to engage in anti-virus software has been linked to risk of the system is still relatively higher. 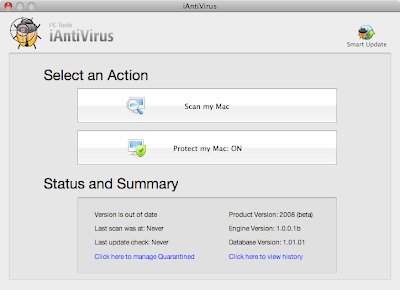 let Firefox and Safari have the same download filefoler

Because he quite dependent on Google Toolbar, so on a Mac, or to use Firefox mostly, but Firefox's default download location is on the desktop, while the Safari in 10.5, the default file download location is in the 【Download】, in order not to often to put the desktop, so put the Firefox download location has its own changes to 【Download】 them, and with Stack to 【Download】 folder on the Dock to use, and nearly three months now, the desktop can almost be said to increase the file is zero, if the same is also a Firefox user, consider look at doing so, but also because doing so, it found that the most common desktop put things, almost all of the downloaded file.

In fact, as early as 10.0, when, Mac OS, there you want to continue the practice of NeXT, repeal Path Finder desktop placement of files to replace the signs, but the opposition seems to be at that time only after the desktop can be placed so that the file is still to continue, It is now 10.5, will be available through the project-oriented way of a fixed folder, there seems to gradually empty the desktop feel.